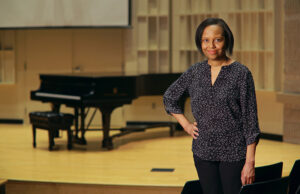 Kimberly Mack is an Associate Professor at the University of Toledo where she specializes in African American literature and culture, twentieth- and twenty-first-century ethnic American literature, autobiographical narratives, and American popular music. Her book, Fictional Blues: Narrative Self-Invention from Bessie Smith to Jack White, was published in 2020 by the University of Massachusetts Press as part of their African American Intellectual History series. Kimberly’s second book, The Untold History of American Rock Criticism, about the BIPOC (Black, Indigenous, and People of Color) and white women writers who helped develop American rock criticism and journalism during the 1960s and 1970s, is under contract with Bloomsbury Academic. Her 33 1/3 book, Living Colour’s Time’s Up, will be published by Bloomsbury in Spring 2023.

Kimberly is also a creative non-fiction writer and music critic. Her most recent essay, “Johnny Rotten, My Mom, and Me,” was published in Longreads in February 2019. She has also contributed her work to national and international publications, including Music Connection, No Depression, Relix, PopMatters, and Hot Press.

Kimberly holds a Ph.D. in English from UCLA, and an M.F.A. in creative writing from Antioch University Los Angeles.